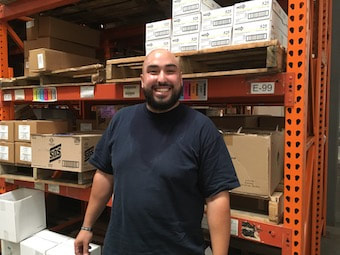 ​
Eric was in his early twenties when he found himself on the streets for a short time. He knew he didn’t want to stay in that environment and instead humbled himself and turned to a brother at Abundant Living Family Church. He was prayed for and provided a three night voucher for rest. At the leading of this friend, he made the decision to move to The River’s Edge Ranch. Eric was a believer, but not actively pursuing Christ. He advises it was the men at The Ranch that had the biggest impact on him, particularly the leaders. They can relate to one another and grow together.

​​
Eric knows being consistent in God’s word...”living it out”...is what helped him through the most difficult times. He suggests to regard The Ranch as a lifetime transformation, not just a rehab or one time change. And he recognizes that letting go of the past and being patient with God’s timing is key.

Eric stayed two years at The Ranch, one year beyond the required commitment, so he could grow his relationship with God even deeper and share the impact of that with others. He has been actively employed since his departure from The Ranch. Eric emphasized the importance of staying connected to church and serving others, and by doing so, this helps him stay on the path and purpose God has for him.